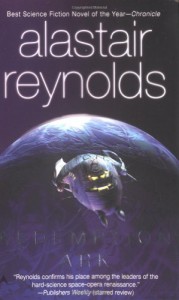 Synopsis: As alien machines build a gigantic machine meant to destroy a star, Ilia Volyova and Ana Khouri hatch a plan to rescue the inhabitants of a nearby planet from annihilation. Meanwhile a maverick outsider abandons his allegiance to his faction in search of a group of powerful weapons to use against the machines.

Review: I'm not gonna lie it took me awhile to get through this book. Its slow, a real slog for most of the book. Clavain's motives aren't clear, aside from 'I'm a maverick. Its what I do.' His reasons for doing what he did in the book seemed very uncertain, as if Reynolds wrote it first then tried to figure out why as he went along. There's very little action, and sometimes potentially interesting things are bizarrely dropped from the plot. There is a point when some of the characters are rescued by a character from the first book (Revelation Space), that is no longer quite human and has become very interesting. After this event that character is never seen again or even referenced. It had a very contrived and clumsy feel as though Reynolds was screaming 'THIS IS JUST A ONE OFF PLOT MECHANIC' at his computer while he typed this bit.

All that said I'm still a huge fan of Reynold's as a dark space opera writer. I wish he would do more of that. Overall his mastery of that subgenre is what saves this book from being an unreadable mess. 3 stars.